How Yoga Positions For Fertility Can Help Couples Conceive 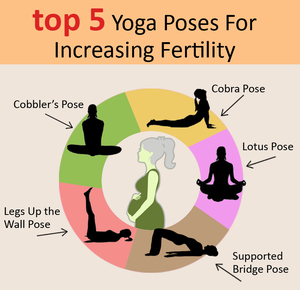 With more and more women delaying having children until later in life, there are a growing number of couples having difficulties conceiving. From their mid thirties onwards, women's chances of getting pregnant drop dramatically and many are turning to medical intervention to assist them in having a baby.

Trying to conceive can be a very stressful and emotional experience, particularly when it involves undergoing fertility treatment or IVF. Many doctors are now recommending women use yoga in conjunction with their medical treatment, both to assist them in de-stressing and to enhance their possibilities of becoming pregnant.

A Harvard based study found that women who were trying for a baby were three times more likely to conceive if they took fertility focussed yoga courses than those who did not. But what is it about yoga that prepares the body so well for conception and pregnancy?

As we have already mentioned, stress can be a major problems when a couple are having trouble conceiving. Stress can interfere with a woman's menstrual cycle and delay ovulation, as well as reducing sperm production in men. The emotional release of yoga can ease stress and anxiety, enhancing a couples chances of conceiving.

This is most effective if both the male and female participate, and a couple might consider partner yoga in this situation. As well as deepening and strengthening their relationship, partner yoga can teach them how to cope together with the strain of trying for a baby.

There are numerous other ways that a fertility focussed yoga course can help a woman to conceive. In yoga the body is seen as an energy system, with a number of different areas or chakras. Certain yoga positions focus on increasing the energy flow in the second chakra, known as the seat of creation, which is where the reproductive organs can be found.

There are many yoga positions that increase energy in the second chakra. Certain restorative poses are perfect to prepare the body for conception. They can help to soften the abdominal region and remove any tension from the area of the ovaries, fallopian tubes and uterus. Reclining poses are used to elongate the abdominal region, allowing more blood flow to the reproductive organs.

There are also specific yoga positions that a woman can use after sex to increase her chances of conception. One of the most popular is a legs up the wall pose, known as Viprarita Kirani. This ensures that the sperm remain in the optimum position for fertilisation for as long as possible.

A final way that yoga can assist conception is by correcting irregular hormone levels that may be limiting fertility. Certain yoga positions can improve glandular function, which helps to normalize hormone levels.

Although nobody would claim that yoga alone can make you pregnant, following a course of fertility focussed yoga can significantly reduce the stress and emotion of trying to conceive. Used in conjunction with medical treatment, it can prepare your body and mind for pregnancy and greatly increase your chances of creating that longed for baby.

Looking for a surtogate mother

Uneasy about selecting the RIGHT IP? Yvision can help!

Surrogate Mother
Apr 14th, 2021
©2014-2021 All rights reserved. Website designed by FindSurrogateMother.com
WARNING: FindSurrogateMother.com is a unique platform that does not interfere with the connections being made in its community. The connections are non-intrusive and made organically between members. While you are in control of your FindSurrogateMother.com experience, your safety is still very important to us. There are certain safety steps that you should always consider: 1) Protect Your Finances & Never Send Money or Financial Information 2) Protect Your Personal Information and 3) Report Suspicious Members and All Suspicious Behavior. You are always the best judge of your own safety, these guidelines are not intended to be a substitute for your own judgment.