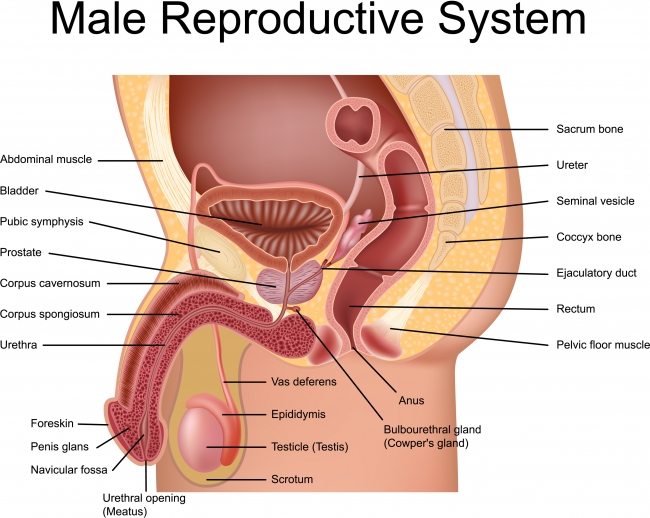 The male reproductive system is solely reliant on hormones — the chemicals that regulate the activity of cells or organs.

Follicle-stimulating hormone is necessary for sperm production and luteinizing hormone stimulates the production of testosterone, which is also needed to make sperm. Testosterone is responsible for the development of male characteristics, including muscle mass and strength, fat distribution, bone mass, facial hair growth, voice change, and sex drive.

The Male Anatomy — External vs. Internal

The main external structures of the male reproductive system:

Male organ intended for use during sexual intercourse. The penis consists of three sections. The root fastens to the wall of the abdomen; the shaft and the glans are cone-shaped portions at the end of the penis.

The glans, also referred to as the head of the penis, is protected by a layer of skin called foreskin. This skin is often times eradicated in a procedure called circumcision. The opening of the urethra, the tube that channels semen and urine, is the tip of the penis.

The chambers of the penis are made up of distinctive, sponge-like tissue. The tissue encompasses thousands of large gaps that fill with blood during sexual arousal. When this takes place, the penis becomes firm and erect, allowing for penetration during sexual intercourse. The skin covering the penis is adaptable to accommodate fluctuation in penis size during an erection.

Semen comprising of sperm is ejected through the end of the penis as the man reaches an orgasm. When the penis is erect, the flow of urine is blocked from the urethra, allowing only semen to be ejaculated.

A Slack pouch of skin that hangs behind and below the penis. The scrotum holds the testicles (testes), and blood vessels. The scrotum regulates the testes. For normal sperm development, the testes must be at a temperature slightly cooler than body temperature.

Organs that are positioned in the scrotum, secured by a structure called the spermatic cord. The testes are in control of creating testosterone, the primary male sex hormone, and for creating sperm. Within the testes are coiled masses of tubes called seminiferous tubules. These tubes are responsible for producing sperm cells.

The main internal organs of the male reproductive system:

Long, coiled tube reposing on the back of each testicle. This tube matures, transports and stores sperm cells that are produced in the testes. During sexual arousal, contractions force the sperm into the vas deferens.

Long, muscular tube that explores the pelvic cavity and the bladder. The vas deferens carries mature sperm to the urethra, the tube that carries urine or sperm to outside of the body, in preparation for ejaculation.

Fusion of the vas deferens and the seminal vesicles. The ejaculatory ducts empty into the urethra.

The urethra carries urine from the bladder to outside of the body. It aids in ejaculating semen when orgasm is reached.

Pouches that attach to the vas deferens near the base of the bladder. The seminal vesicles produce a sugar-rich fluid that provides sperm with a source of energy to help them move.

Structure located under the urinary bladder in front of the rectum. The prostate gland contributes fluid to the ejaculate. Prostate fluids also help to nourish the sperm. The urethra, which carries the ejaculate to be expelled during orgasm, runs through the center of the prostate gland.

Dime-sized structures located on the sides of the urethra just below the prostate gland. These glands produce clear, slippery fluid that empties directly into the urethra. The fluid assists in lubricating the urethra and to neutralize any acidity that may be present due to residual drops of urine in the urethra.

Message me if you need sperm

Who want my sperm