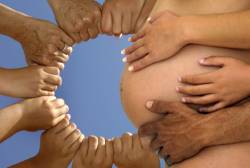 What Types of Surrogacy Options Do I Have?

If an Intended Mother cannot carry a baby to term her egg and the Intended Father's sperm are used to create a donor embryo (by IVF) that is implanted into the Surrogate Mother. Using this approach, the child is heritably linked to the Intended Parents.

If both of the Intended Mother and Intended Father are incompetent, the Surrogate Mother can carry a donated embryo. Using this approach, the child is not genetically related to any of the involved parties.

In addition to the six types of surrogacy, these agreements are often classified bestowing whether a financial reward is introduced or not.

What is Commercial Surrogacy?

Implicates that the Surrogate Mother is rewarded compensation fee for her involvement. This fee covers not only medical expenses but also miscellaneous expenses related to the pregnancy, including travel provisions, but a sum for her time and unselfish efforts.

What is Altruistic Surrogacy?

Throughout some places in the world, commercial surrogacy is illegal and gestational surrogacy is prohibited in other places. However, a number of countries allow all types of surrogacy agreements.

Follow our surrogacy laws section to see what’s allowed in your location.

The Joy and The Trauma of Carrying a Celebrity's Baby

Why am I on here?

©2014-2023 All rights reserved. Website designed by FindSurrogateMother.com
WARNING: FindSurrogateMother.com is a unique platform that does not interfere with the connections being made in its community. The connections are non-intrusive and made organically between members. While you are in control of your FindSurrogateMother.com experience, your safety is still very important to us. There are certain safety steps that you should always consider: 1) Protect Your Finances & Never Send Money or Financial Information 2) Protect Your Personal Information and 3) Report Suspicious Members and All Suspicious Behavior. You are always the best judge of your own safety, these guidelines are not intended to be a substitute for your own judgment.