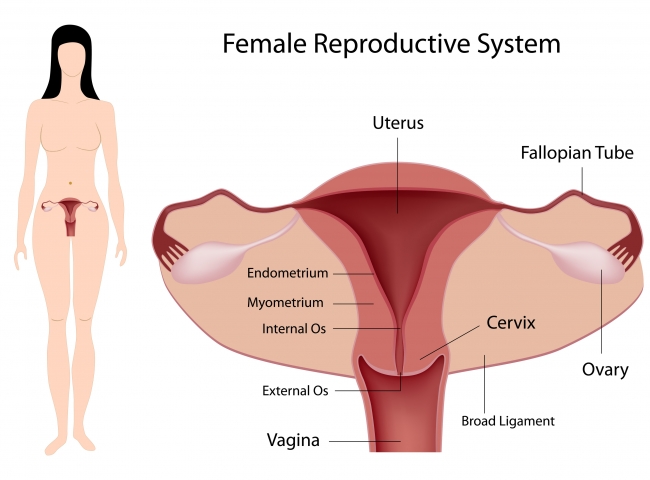 At birth, the number of follicles are fixed and this number decreased with age because ovulation and follicular atresia (natural death). A woman has approximately 1 million eggs at birth but only 300-400 eggs will reach ovulation during a woman's reproductive lifetime.

Commonly, a woman in her 40s-50s enters the stage of menopause. Is natural process that involved decrease of hormone secretion and mark the end of the reproductive cycle (menstrual cycle).


During ovulation, the egg travels along the Fallopian tube. If meets a sperm, fertilization happens. The zygote (fertilized egg), settles into the walls of the uterus or implantation. This is the first stage of pregnancy, a very precise mechanism. If fertilization does not occur, hormone levels start to decline and after 14 days (approximately), the uterus collapse and produce menstruation.

The Female Anatomy — External vs. Internal

The function of the external female reproductive framework enables sperm to enter the body and further safeguard the genital organs from infectious organisms.

The main external structures of the female reproductive system:

Bartholin's glands are located at both sides of the vaginal opening and produce a fluid (mucus) secretion to lubricate the vagina.

The clitoris is beneath the prepuce. The clitoris is an approximately ¾-inch structure of highly sensitive tissue that becomes swollen with blood during sexual stimulation.

The main internal structures of the female reproductive system:

The uterus, also known as the “womb,” is a hollow, muscular organ that is connected to the fallopian tubes at one end and the vagina (via the cervix) on its inferior end.  During early embryo development and pregnancy, the uterus surrounds and supports the developing fetus.  The endometrium, the inner lining of the uterus, provides the necessary support for embryo attachment and early-stage development.

The ovaries are a pair of small, almond-sized glands located in the right and left sides of the abdominopelvic cavity along the lines of the upper portion of the uterus. The ovaries produce important female sex hormones such as estrogen and progesterone and are also the site of female gamete/ova (egg) production. Each month (after puberty and before menopause), a mature egg cell is released form the ovaries and taken up by the fimbria of the fallopian tube where it may be fertilized by a male sperm cell.